When I heard our September meeting was going to be on the subject of craftivism, I can honestly say I didn’t expect to go along and hear the phrase ‘Stitch n Bitch’ nor discover there is such a thing as a ‘vulva quilt’!  But it soon came to light that craftivism isn’t just knitting squares for blankets (that’s still good, I’m not knocking it), but this is full on feminism with a point – excuse the pun.

Jenny White from Warp & Weft talked us through the history of craftivism right up to its present day headline grabbing stunts.  It’s thanks to Jenny and her colleague Helen Davies that Manchester is getting a statue of Emmeline Pankhurst.  Jenny and Helen were the formidable duo behind placing masks of brilliant Manchester women over the statues of men in Manchester Town Hall.  And it was this stunt that prompted the movement to secure a female statue.  We were lucky enough to see and touch for ourselves the masks crafted for this now famous stunt. 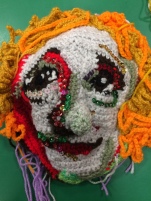 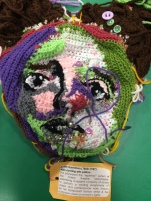 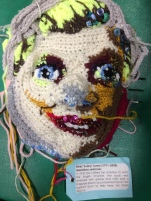 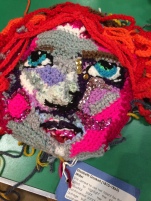 Jenny also put out on display a 7-metre long banner, made up of knitted squares, that was unveiled in the concourse at Piccadilly station when attendees coming for the Tory Party Conference got off the train in Manchester.  It reads ‘Don’t Stitch Us Up!’.  A powerful, visual way to make a statement. 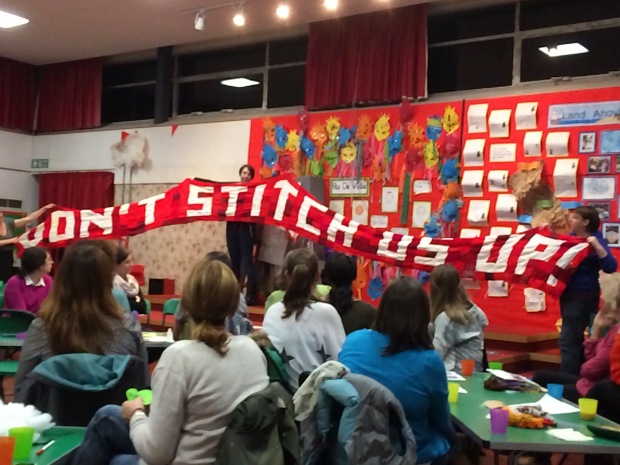 And as for the ‘vulva quilt’, there was a very serious message behind that.  A fellow WI group, the Shoreditch Sisters  made the quilt as part of their campaign against FGM (Female Genital Mutilation).  The quilt ended up appearing in the BAFTA nominated documentary, The Cruel Cut.

So despite some feminists of the 1970s arguing that you couldn’t be a crafter AND a feminist, September’s event very much contradicted that school of thought.  We all felt inspired and are now coming up with ideas on what we can do in our own community of Sale and Sale Moor to make lives better using craft.  Even if it just puts a smile on someone’s face.  Any ideas?  Please send them over – email, tweet or even a hand sewn message will do.

Yay! It’s Jenny Eclair! 💜🐝
Sale is blossoming! 🌸🌱 #springhassprung🌸 #salem33 #ashtonlane
HAPPY INTERNATIONAL WOMEN'S DAY!
Thank you to @jacquifowlerglass for a fascinating talk on women stained glass artists of the 20th century!
We’re making scarves to support local charities, thanks @cheshirewis for the inspiration! 🐝💜 #crochetaddicts #womensinstitute #supportlocalcharities
What a lovely end to a not so lovely year! Crafting, charades and karaoke at our Christmas Zoom party. See you next year all you Bee Moor bees and bee followers 💜🐝

The Bee Moor WI was established in January 2017.  Founded by a committee of likeminded ladies dedicated to fostering a fun, interesting and diverse community  WI within Sale Moor, Manchester. Meet and get to know a little more about our lovely Committee members.